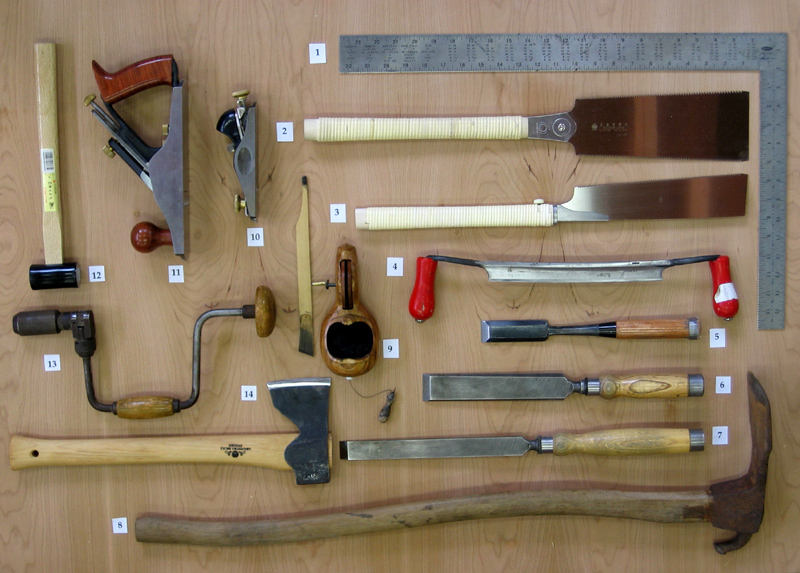 These are the hand tools that I am going to use for the timber bed project. I didn’t include everything, like a pencil or a utility knife, but I did include the majority of the tools I am going to use. They have all been numbered for reference; see below for descriptions.

1. Framing Square – Used for the majority of the layout on the timbers along with a tape measure.
2. Japanese Ryoba Pull Saw – Designed to cut on the pull stroke, thus it has a much thinner blade than a western saw. This aids in the speed of the cut. The saw is two sided – one side for rip cuts and one side for cross cuts.
3. Japanese Dozuki Saw – Thicker than the above saw for sawing through plywood.
4. Australian Draw Knife – Used in a pulling fashion. I will be using it to aid in cutting the curves on the top beams of the bed.
5. Japanese Timber Chisel – The Japanese make some of the best chisels I know of, accomplished by laminating a softer iron to the harder cutting steel to produce a chisel that is both strong and will hold a keen edge longer than most other chisels.
6. 1 ½” North American Bevel Edge Framing Chisel – This chisel is used as a general use chisel to clean out mortises and clean up tenons. It also excels at getting into the corners of mortises because of the beveled edge.
7. 1” North American Framing Chisel – Also used as a general-purpose chisel or as a slick because of its long length. This chisel is great for working end grain. (Not shown: 2” North American Chisel, great for cleaning up tenons).
8. Adze – Used to help scoop out wood for curves and general smoothing.
9. Japanese Traditional Ink Line (Sumitsubo) – This tool is like a chalk line, only it uses water-based ink instead of chalk. It is used in combination with a Sumisashi, a traditional bamboo marking pen.
10. Low Angle Block Plane – This tool is used for general planing needs and excels at cutting end grain.
11. #4 Smooth Plane – This is a very versatile plane. It can be used for general shaping, smoothing, and finishing.
12.Japanese Chisel Mallet – This mallet is similar to a dead blow hammer. It is laminated similar to the Japanese chisels. The softer inner iron encased with harder steel produces a mass that directs more force into the chisel.
13. 10” Swing Hand Drill – This drill will be used for any drilling needed on the project.
14. German Carpenters Axe – This axe is specially designed for working in dry wood. It has a lower ground angle than a felling axe and is smaller to help with controlled use. 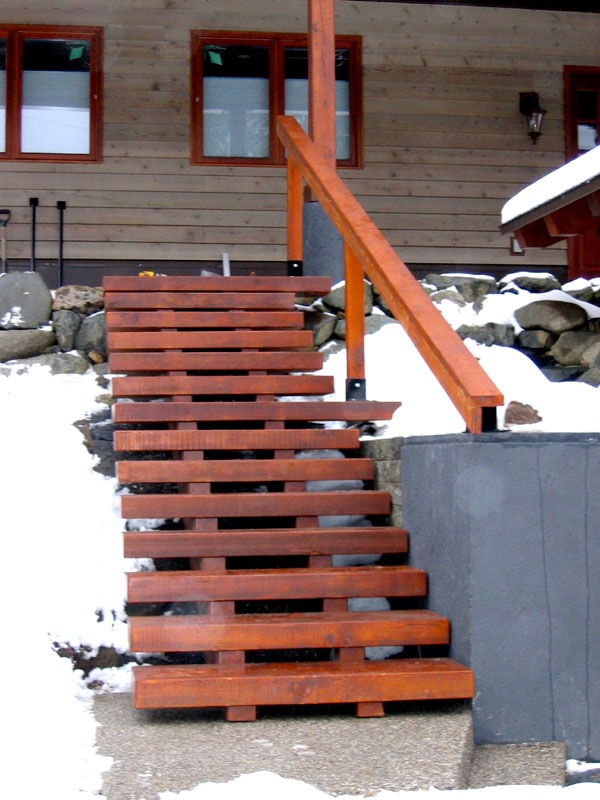