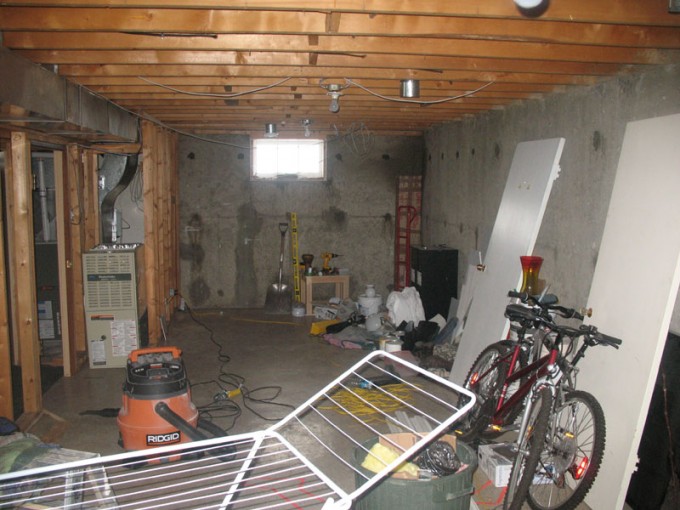 We were contacted in January to travel to Edmonton and renovate an unfinished basement in a house built in the 1950’s. This family of three is expanding with a planned pregnancy this year, and they need more room in their living space. They also have in-laws that live in Australia, and they needed a guest suite to accommodate long visits comfortably. One bathroom is just not enough!

We started the project at the beginning of March, and there were several challenges at the outset that needed to be addressed. The grading and drainage around the house were not ideal, and the concrete walls were allowing moisture into the basement. The homeowner mentioned that there had been a lot of precipitation in recent years in Edmonton, and the previous walls of wood paneling were harbouring mould before he ripped them out in preparation for the renovation.

The stairs were too steep, with a step rise of 8 ½ inches, which is over half an inch higher than the maximum rise of 7 7/8 inches that the building code allows for. The current stairs are a hazard for children, and the family was concerned about their safety of their toddler as he begins to walk and wants to follow mom and dad up and down the stairs.

Finally, the amount of headroom may be a challenge in the basement, since raising the floor and putting in a ceiling to make a comfortable living space will decrease an already somewhat cramped ceiling height. In Edmonton, forced air furnaces fueled by natural gas are common, and the furnace ducting runs under the floor joists for the main level. This means even less headroom in key areas, such as the entrance to the main basement room just beyond the bottom of the stairs.

Check back to read more about this reno.